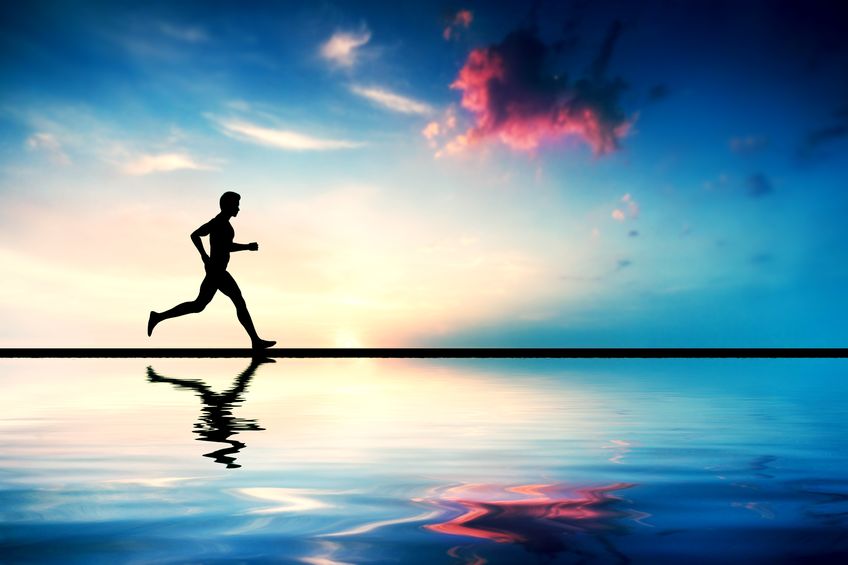 Does this have a familiar ring to it? Training is going well. Workouts leave you feeling quick and strong. So, you push that little bit harder to gain the edge. Suddenly, there is that ominous…snap! It could be a hamstring, calf or tendon. Well if you haven’t experienced this before then at least some of the athletes you treat have

So now your athletes come to you asking when can I start training again or what can I do now? Well they could try the old Monarch bikes in the “Lower deck” which might still create pain, depending on their injury or will bore them to tears in about three days. They could stay home and rest and their fitness level will drop and their grouchiness rise in direct proportion. OR they could start Deep Water Running (DWR). We can credit this breakthrough to horse trainers. An astute equestrian trainer found that by equipping a thoroughbred with floatation devices, the animal could run in deep water, and maintain conditioning while avoiding the impact of running on land.
Many athletes have discovered the benefits of DWR during injury. Olympian Mary Salney set a U.S. record in the 3000m immediately after a month’s DWR and many other athletes, such as Bob Kennedy a 1996 U.S. Olympian, make it part of their workout program after having regained full health as it’s a great change of pace with less stress on the body.

Water has certain characteristics, which are ideal for non-weight bearing resistance training. The most obvious is the buoyant effect. Because you float at or near the surface of the water you can run suspended in water without pounding or jarring your feet or joints. Wat
er is also viscous and so as you move your arms and legs through the water you encounter a resistance, which is 10% more resistant than air. This resistance can be used to strengthen both muscles and joints and allows for effective feedback from isotonic strengthening exercises. Water increases the speed of blood flow to the heart whereas when you are on land gravity concentrates the blood in the lower body. Because more blood flows to the heart in DWR, water activity promotes faster recuperation from bouts of intense exercise. Another advantage to water running is its cooling effect, body heat is more quickly dissipated and therefore less time is required for recovery. The higher temperature of the water relaxes the athlete and facilitates pain management during exercise. Sensory feedback from the water makes it ideal for retraining the proprioception deficient individual.

DWR is a way of continuing your athletes training while injured, or supplementing your athletes existing training program to either enhance recovery or to increase the quality of their training. Because gravity works in opposition to buoyancy in the water its effect is hardly noticeable. When a person is in contact with the ground, gravity has a compressive effect on the joints of the lower extr5emities and spine. During DWR, buoyancy supports the body and protects the weight bearing joints

1) the body is tilted slightly forward to approximately 5 degrees past the vertical, with the spine in neutral position.

2) The head is held comfortably out of the water, facing forward.
3) the arm action is the same as for land running, with the primary movement occurring at the shoulder and with the hands relaxed but slightly closed

Symmetry is necessary during DWR. If one side of the body is working harder than the other, it will be impossible to maintain a correct vertical position, and any muscular imbalances will therefore become evident.

Leaning too far forward or too far back creates a turning effect or torque in the water. Because there is no contact with the pool floor, the athletes trunk musculature must act to stabilize the body as the limbs are moved. This does not build strength and power in these muscles but it does improve co-ordination and proprioception.

One can purchase a specialized runner belt, such as the Aquajogger or an athlete can use a floatation belt.

However full life jackets and early prototypes of floatation are generally unsuitable because they fit badly and most seem to restrict arm movement. Also, some athletes have reported chaffing under the arms and in the groin for some devices. However

The great advantage of flotation devices is that they allow the athlete to learn the proper running styles without having to keep him or herself afloat. For those athletes who are not very strong this can make a significant difference to how long it takes to learn how to water run properly.

Disadvantages of Floatation Devices: are that the floatation devices need to be worn tightly and this can constrict breathing in some athletes and can feel restrictive and unnatural.

Free (i.e. without a floatation device) Deep Water Running requires much more absolute strength and strength-endurance to complete workouts compared to using floatation devices. This can add a measure of difficulty and therefore increased training effectiveness to workouts.

Disadvantages of Free Deep Water Running: The major difficulty is learning the technique but one can initially start using the floatation device and then when they feel they have mastered the technique they can then remove the device. Another disadvantage is that for some high intensity workouts a great amount of stress is put onto the torso to keep it stable and on the legs to keep them in the proper plane of motion. These problems have apparently according to Dowser et al. (1991) lead to stress fractures of the ribs in one case and in the fibula of another case.

The recovery times of the workouts given in running books seem to lie somewhere between those recommended for swimming workouts, which are very short, and those for land workouts, which are longer. The research seems to believe that this is because of the reduced stress on the body and/or due to the increased thermal dispersion in the water. However, as the demands for endurance and strength-endurance increases, so the recovery time for a work interval more closely approximates the land equivalent. The issue that complicates the research is that most of the body heat generated when training is lost through the head, but the head is the only part not in the water.

As for land workouts, the time spent recovering between work intervals needs to be determined according to the specific physiological response required for the workout.

The research claims it is difficult to assess the relationship of the exercise intensity between DWR and land running. However I have included as much of the possible research as I could find at the end of the talk, but the general theme is that the HR max and VO2 max are lower in the pool but not by much.

Hydrostatic pressure also provides resistance to chest expansion in deep water. The intercostals and diaphram must work harder, thereby strengthening the muscles involved in breathing which is an added training bonus. Increased water pressure can cause some athletes to use only the upper portion of their lungs. A concerted effort should be made to increase the athlete’s use of the bottom portion of their lungs otherwise they may be short of breath. This can be corrected by teaching deep diaphragmatic breathing whilst in the pool.

Returning to normal training from total DWR needs particular attention. The same reasons that allow athletes greater choice in stride length and frequency also present problems when making the transition back to land after rehabilitation if they have become neurologically used to the pattern. Like any rehabilitation program gradualism for both duration and intensity are important in DWR. For example in their first week out of the pool a graduated program would use two pool and one land workout, the second week would include 2 land and 1 pool and finally in the last week the complete transition to land running would be made.

For those who have casts (this is not a problem as long as the cast has adequate drainage) special care must be taken when making the transition from wearing a cast to having no cast because of the resulting great strength and flexibility differences between the limbs the athlete must reduce the stride frequency. The increased resistance felt by the limb with the cast will result in it having greater strength, especially in the hip and upper leg muscles. Once the cast is removed there is a tendency for the athlete to work the “cast” limb harder to get the same level of perceived exertion as experienced with the cast on. This can injure the weaker “cast” joint because of its inherent reduced strength and neuromuscular co-ordination.

Exercise in DWR can achieve heart rates, and muscle lactate values close to those obtained on land. This however depends on two things; the rate of neuro-musclar activity (which depends on specific strength factors of the large muscle groups) and the skill of the athlete in being able to execute particular DWR movement patterns.

The strength component of DWR has two factors to consider:

So as the direction of thrust tends to the horizontal the strength required to move the body increases.

Closely related to the strength is power. There should be a smooth application of power over the entire range of motion and in as horizontally as possible a direction. This means that unlike land running there is no recovery phase in the running stride. The improper application of power, even with the proper technique, can result in two effects bobbing and moving backwards.

Bobbing occurs if the application of the power is mostly vertical and/or only with the driving leg.

Going backwards occurs when the direction of thrust is horizontal but the power is applied only during the recovery phase.

This technique is similar to jogging (recovery running). The idea is to reach out with the leading leg and pull through the water through strongly and evenly. Because of the increased resistance in the water, the trailing leg needs to be actively pulled forward at the same time. The front foot should land in front of the body’s centre of gravity. Keep the knees low and actively flex the foot at take-off.

Benefits of this technique are to 1) provide a sound platform from which to learn and execute the advanced techniques properly. 2) To give the athlete an endurance training effect.

This technique is to simply make the legs go as fast as possible. The strides are kept as short as the athlete can make them. The legs are moved up and down with the landing slightly behind the center of gravity. The arms need to be in a normal maximal speed running style.

The idea here is to keep the upper leg as still as possible while flexing the lower leg. This is just like a hamstring curl but upright. Its difficult for the athlete to achieve full flexion and great concentration is required to perform this technique properly. If done correctly there is a slight tendency for the athlete to move backwards in the water but this is normal for this stride only. The hands can be used to prevent this and to stabilize the body.

Here the athlete is required to drive the leading leg up as high as possible with little emphasis on the trailing leg. A slight forward lean is recommended with the trailing leg land significantly behind the centre of gravity and the arms definitely need to be active.

This is probably the most difficult pattern to learn and is used in the most demanding workouts. Here the leading leg is landing slightly in front of the center of gravity. The trailing leg must be strongly curled up at the back of the stride to reduce the force needed to bring it forward. The arms must be vigorously used. A great deal of strength is needed to do this with any speed at all.