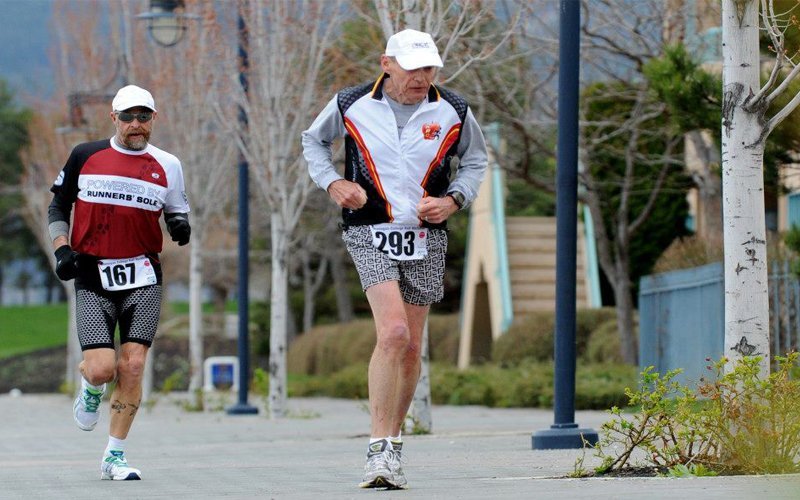 “Hi Ron – took me a while to find out if my Plantar fasciitis would allow me to run at your get together. I’ve been doing all the series races, but am usually only able to run very little between events. After going to my doctor, and a couple of physios with no results, and paying a fortune for new orthotics I was getting pretty discouraged. I couldn’t even walk the golf course without ending up limping badly! Then I went to the seminar that the running club was involved with, at Wave Physio. I had met Greg Redman (the physio) previously, as he is the son in law of a guy I paddled with, in a couple of Ski to Sea races. I knew he was a national class kayaker, and an Olympic team physio, so a couple of days later I called him and asked him what he knew about plantar fasciitis. The first thing he said to me was that it was no use to treat it until he knew what was causing it. That was the first time anyone had said that! He spent most of an hour examining my feet. Finally he told me that I had a problem with the big toe on my sore foot. It was not working properly. He jury rigged a pad for my orthotics and then phoned Okaped and told them how he wanted the orthotics changed. It has made a huge difference!! Ran the Oliver 10K on Sunday and played 18 holes Monday. Could not have done that before. The reason for this long explanation is that I know other runners in our group have similar problems. I would highly recommend they give Greg at Wave Physio Kelowna a try.”

“Greg – just thought I’d let you know how my Plantar Fasciitus is doing.  Since you figured out what the problem was and had my orthotics modified the results have been great.  I’ve run, and won my age class,in 9 races this year, from 5K to Half-marathon distances, play golf 4 days a week, (walking and carrying my clubs) and the plantar problem has virtually disappeared!  I’m running better than I have for a long time as I can train harder and more often.

Thanks and best regards – Bill”